Instead of just whingeing about ‘vanpackers’ illegally camping in Byron Bay streets, Byron Shire Council has taken up the challenge of finding somewhere for them to legally spend the night.

Labor Cr Paul Spooner issued the challenge with his notice of motion on so-called ‘freedom camping’ at yesterday’s council meeting.

But, he said, ‘we need to take another look at this new reality that has occurred over last 10 years’, adding that, ‘if we’re going to go from zero tolerance – fining people – to a management approach, we need to look at different models.

Despite its appealing name, so-called freedom camping would probably not be free but subject to a minimum charge to cover the expenses of council or private operators, including garbage, sewerage, toilets, showers and security.

The proposal received vocal support from perennial public access contributor, Morgan, who sleeps in her car and has long been at odds with council over its policy of banning people sleeping in parked cars overnight.

‘We’ve invited the world to Byron Bay,’ Morgan told councillors, ‘and we’re obliged to provide accommodation for them.

‘At First Sun it costs $46 a night for an unpowered site and they’re booked out well in advance of high season.’

Morgan went on to attack council signs prohibiting camping and sleeping in vehicles overnight as being ‘not legally valid’.

‘This proposes a lawful method of dealing with the problem, thus councillors should vote in favour of Cr Spooner’s motion,’ she told the meeting.

Morgan suggested that parking spaces in the commercial precinct behind the shops could break even or make a small profit if let out at $10 per night, after paying for the addition of rubbish bins, security and portaloos.

If there were problems, ‘it’s a quick run to the police station,’ she added.

Cr Spooner said that in framing his concept he had talked to council staff, other interested parties and examined websites such as Youcamp, an association of private landholders who offer camping in exchange for a small fee or work exchange.

He acknowledged that some sites were already operating, including Mullum Leagues Club, Red Devils in Byron Bay and that other operators could change their business model to incorporate it.

He agreed with Cr Ibrahim that council should look to starting with a workshop to develop the concept before requesting a staff report and calling for expressions of interest.

The mayor threw in his own suggestion that the Sport and Cultural Complex could be ideally sited, with plenty of overflow parking and shower and toilet facilities already in place.

But Cr Woods was caustic in her dismissal of the plan, saying there was ‘no point in discussing anything until there is an expression of interest’.

‘We hear about all these tourists coming to town and wrecking it. Well here’s another way of encouraging yet another group of tourists with even cheaper camping,’ Cr Woods said.

She added, ‘we already have a huge group of bush campers at Mullumbimby Showground,’ of which she is a trustee.

‘There are places they can go without council getting involved in providing more.’

Cr Cameron said there was ‘no point in putting out expressions of interest if we can’t tell potential partners what we want’.

‘I first put this idea up four or five years ago but it seems we are “creeping” towards a good solution,’ he said.

‘The separation of markets is important,’ Cr Cameron added.

‘The grey nomads in their well-serviced vans are generally looked after but the lesser-serviced vans are more like a backpacker market. It’s not about bringing more tourists but managing impacts, stopping people camping inappropriately on footpaths and nature strips,’ he said.

In his right of reply Cr Spooner agreed there was a need to define the issue more clearly before putting out expressions of interest.

‘Cavanbah, the traditional name for Byron Bay, means meeting place. Let’s embrace that concept and help manage it with local businesses, landholders and providers so people can have a great experience.

I’ve travelled around in a Kombi and at times would have loved an option like this. It’s about [them] sharing an experience with fellow travellers rather than pissing off neighbours,’ he said.

The motion was passed with councillors Woods and Cubis voting against.

I move that Council:

This motion seeks to provide the structure for a trial that would inform the long-term development of such management strategy for the Shire.

EC2.1 Build a tourism industry that delivers local and regional benefits in harmony with the community’s values.

EC2.2 Develop Byron Shire as a leader in responsible and sustainable tourism and encourage sustainable business practices within the tourism industry.

Definition of the project/task:

– Establish the viability of conducting a 12 months trial of a Freedom Camping site or sites within the Shire.

– Identify an appropriate partner or partners to undertake such a trial through an Expression of Interest process.

– Development of appropriate elements to include in a trial.

Relationship to, priority of, and impact on other projects/tasks: Freedom Camping is a topical issue for the Byron Shire community in terms of poor behaviour of a selection of travellers in this sector. The tourism industry/visitor economy has also suffered from this negative image of the traveller. The trial project has the potential to provide Council with a proactive means to both develop and manage the future impacts of Freedom Camping through designated sites and facilities and a supporting education/communications program. Byron Shire Council will also have the opportunity to share knowledge with other Councils in the region as part of broader regional approach to Freedom Camping. 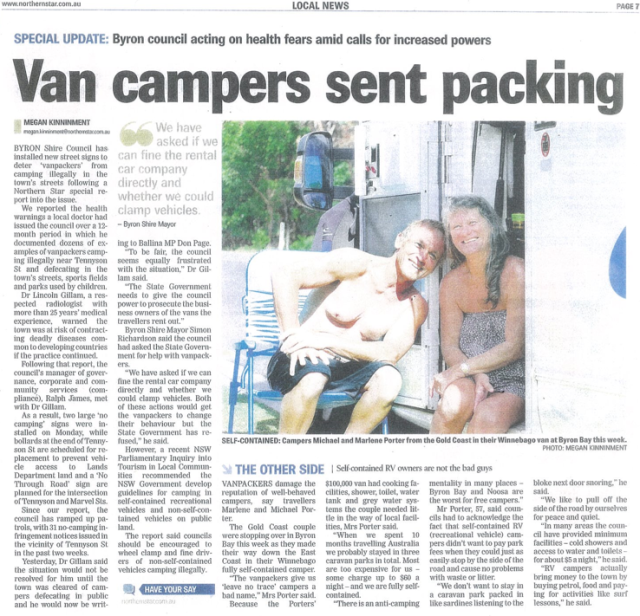